A Message from the Past

Some time in prehistory perhaps as long as 17 centuries ago, someone carved a message into a sandstone cliff overhung by a sheltering ledge in what is now southern West Virginia. Who cut the strange symbols? Why were the carvings done at that location? Precise answers to these questions are unknown. For many years, people assumed that the weathered writings, called the Wyoming County Petroglyph, were the work of American Indians. But a recent translation of the message there by an expert on ancient languages is astonishing and promises new significant insight into West Virginia's early history

WHAT IS A PETROGLYPH?

Any carving or line-drawing on a rock is a petroglyph. Past civilizations have left unimpeachable records of their existence by simply choosing as their medium the most indestructible of materials—stone. Stone does erode, but it erodes very slowly; and marks cut into stone by natural forces or by the hand of man may still be discerned centuries later. Petroglyphs are often covered by soil, their sharpness preserved. Those which are exposed to weathering are worn away to some degree and are frequently coated with moss, lichens, rock mushrooms and microscopic plants, which are extremely difficult to remove. In weathered stone, the trained person can discriminate between natural features and those made by man, and can judge the age of a carving by the degree of erosion and the types of figures represented, along with other factors.

Some societies, such as that of the Egyptians, left elaborate histories in stone that are unmistakably intended to convey specific information. All petroglyphs, however, do not fall into this category Some are intriguing, yet indecipherable; others are apparently meaningless graffiti created by some ancient doodler or perhaps by a culture which possessed no written language. Petroglyphs are often discounted as scribblings made by children or random works by shepherds or others who intended to convey no particular message.

Petroglyphs abound where the great civilizations of the earth existed: Egypt, India, South America, Mexico, the Orient, the British Isles and other places. In America, native Indians (The newest terminology is "Amerindian," a word that describes not only the people living here when America was colonized, but also the early, unidentified cultures which have inhabited this continent) left many petroglyphic records in the West. But in the East, petroglyphs are fewer. Indian petroglyphs usually employ animal forms, tracks and other rudimentary pictures to express simple messages. It has been commonly believed that early native Americans possessed no language or alphabet. But in recent years, amazing conclusions have been reached as to the origins of certain ancient North American petroglyphs. They have been determined to represent European, African, Semitic and other languages, and to have been created hundreds of years before Columbus discovered America. There are many theories about those early visitors, but there is no question that they left petroglyphic records written in languages that can be accurately deciphered. Because of the humble petroglyph, ancient history is being revealed at an exhilarating pace.

There are several recorded petroglyphs in West Virginia. No doubt local residents know of more whose existence has been ignored for various reasons. During an archaeological survey in southern West Virginia, Robert L. Pyle learned of the Wyoming County Petroglyph from his assistant, local resident Tony Shields.

At 6:58 A.M. in the predawn darkness of early spring, roosters crowed and dogs barked in nearby valleys, as Tony Shields and Robert Pyle waited for the first ray of light to appear. Water dripped from the ledge behind them as they waited. The sky filled with color: the distant sounds of civilization seemed to fade. As the men turned to behold the ancient petroglyphic message, they felt an awesome affinity to the long-dead scribe who created it centuries ago.

This petroglyph has been known to exist at least since 1964, when two amateur archaeologists investigated and recorded it. The following year, professional archaeologists investigated the site. A thorough study was conducted in 1970 by an archaeologist with the West Virginia Economic and Geological Survey. The results of that study are on file at the State Department of Culture and History's historic preservation unit. The record states that the aforementioned archaeologist noted the sharp contrast with other known petroglyphs in the region (i.e.. absence of human or animal features; the sharp, deeply incised lines, etc.) and concluded that the writings were done in late prehistory, circa 1300-1500 A.D. by a people unknown culturally though certainly American Aborigines.

The seven-inch long, blacklimestone Decalogue Tabletwas found in a spheroidal boxof light brown, calcareous sand-stone, with a whitish cementat the edges in a small moundnear Newark, Ohio, in 1860. Translation of its Hebrew inscriptionrevealed a shortened version ofthe Ten Commandments.Illustration from a drawing by Hilary Grimm.

The Wyoming County Petroglyph was mentioned and part of it was pictured in a local history publication. It was commonly presumed to be the work of Indians. The primitive, apparently meaningless, jumble of markings on the sandstone cliff withstood the elements, unaffected by centuries of human history waiting, one might say for someone to understand the message.

Robert Pyle recognized the unusual qualities of the message wall and believed that the carvings resembled Runic writing or some other ancient language. He assessed the age of the petroglyph at 500 to 1000 A.D. (plus or minus 200 years), based on the discovery nearby of artifacts identified with the Buck Garden Indians (500-1000 AD) and the Late Armstrong Indians (100 B.C. to 500 AD). Although the petroglyph cliff and overhang form a small shelter of the type commonly used by primitive man, Pyle and Shields found no artifacts or signs of human habitation. (Records of past investigations, however, indicate that artifacts and human remains were removed previously; this is now being researched.)

The Buck Garden and/or Armstrong cultures, which were tentatively credited with creating this petroglyph, supposedly had no written "abstract" language, nor, it has been presumed, did the Adena and Hopewell people who existed at an even earlier time. Yet, stone tablets found in Adena and Hopewell mounds are engraved with strange markings recently determined to be Iberian and Hebrew (Semitic) scripts, which language experts have deciphered. (See Wonderful West Virginia, March 1981.) Traced to a trans-Atlantic origin, these ancient documents clearly indicate that the American continent was visited and peopled by voyagers from other lands long before Columbus "discovered" it, and that complex native cultures once flourished in America. [The March 1981 citation refers to Ida Jane Gallagher's article, "Stone tablets found in mounds reveal startling old scripts" - editor]

This concept is innovative and controversial. But the sandstone petroglyph silently supports it. And at the first light of day last March, a puzzle presented itself: Pyle believed that the most perplexing part of the inscription, which looks like a bunch of irrelevant slashes, was not meaningless but was intrinsic to the message. If this script could be traced to a European root, then the local natives/Indians had either learned it from trans-Atlantic travelers, or the petroglyph was carved by someone other than an Indian. Pyle determined to learn which, to seek protection for the site and to ascertain its true significance.

In April 1982, Pyle and Shields recorded the petroglyph in several ways and in the greatest possible detail. First the men removed and brushed away extraneous debris. Pyle examined the carvings through a magnifying glass, as he chalked those indentations he judged to be authentic. The chalked characters were then photographed. In the next step, he created a three-dimensional peel by brushing liquid latex over the carved stone, strengthening it with cloth, and peeling it off when cured. Pyle then suspended a white cloth over the entire petroglyph, positioning the material to avoid distortion. With a black felt marker, he traced the previously chalked markings onto the cloth.

Pyle noticed additional carvings on a lichen-covered section of the left end wall, which joins the rear petroglyph wall at right angles. He cleaned the wall and exposed the writings. What appeared to be "chicken scratches" and gouges in the sandstone wall were later determined to represent a fully developed and translatable language.

From March to Mid-December 1982, Pyle visited the site about 18 times. In one of the later visits, he noticed that the rock stratum directly in front of the cliff deserved scrutiny and found petroglyphic writing there. It, too, is being investigated. 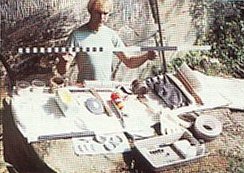 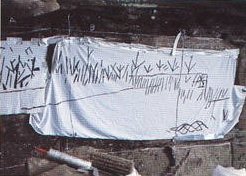 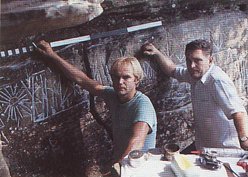 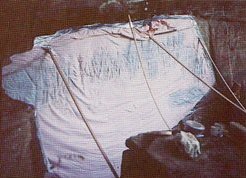 A resident of Morgantown, George Breiding, saw the editorial, clipped it and sent it to Arnout Hyde, Jr., editor of Wonderful West Virginia magazine. Hyde sent the clipping to Ida Jane Gallagher, a native West Virginian now living in Connecticut. She is a freelance writer specializing in historical research. Gallagher was astounded. The rock carving appeared to be a form of ancient writing, which she had photographed in New England and Colorado. Gallagher shot back an enthusiastic message, confirming her interest in finding out more about the petroglyph. And she wanted to see it in person.

Hyde contacted Pyle and asked him to call Gallagher and arrange a visit to the site. Thus, an enthusiastic group of people, whose common goal became the recording and preservation of West Virginia's ancient rock carvings, visited the Wyoming County Petroglyph site in November 1982.

Subsequent events leading to an amazing discovery are related in the following stories in this issue, by Ida Jane Gallagher and Barry Fell.

Robert L. Pyle, a Morgantown resident, has a GS-9 rating as an archaeologist by the federal government and is qualified to do archaeological investigations on federal projects. He has 27 years of experience in the fields of geology and archaeology beginning at age 12, under the tutelage of professional people at West Virginia University and the West Virginia Geological and Economic Survey. During interim employment in other areas, Pyle has continued independently investigating archaeological sites and geological phenomena. Presently a consulting archaeologist, he conducts federally-required site investigations for industries.

Working on his own, motivated by personal and historical interest, with input to state archives, Pyle has discovered, studied and reported 62 sites, 37 of which have been given official numerical designation as archaeological sites in West Virginia, Missouri, Pennsylvania and Arizona. His experience ranges across the entire spectrum of human influence, from ancient Indian villages, camps and petroglyphs to pioneer habitat and industries, and includes the study and classification of rocks, minerals and plant and animal fossils.

Pyle's efforts are directed toward the acquisition of knowledge concerning man's past history and the preservation of historical and cultural remains. His work is designed to meet the urgent need for the cohesive and comprehensive reporting of human history especially in the region which includes West Virginia, and the publishing of that information in school textbooks and throughout the public domain, so that those who seek such knowledge will find it readily accessible.