Avocational archaeologists and interested members of the public are a vital resource in the Council for West Virginia Archaeology (CWVA) mission to protect and study West Virginia’s past. Due to limited funding, we often rely on the public to be our “boots on the ground” and we acknowledge that local people can be the best resource for local history.

To that end, it is part of the CWVA’s mission to educate the public on ethical and science-based archaeology, as well as encourage responsible documentation of cultural resources. Whether you are an experienced avocational archaeologist or a fledgling professional with the best of intentions, it is easy to lose sight of the ideas discussed below. Even more dangerous are the untrained newcomers or blatant looters who are ignorant of the key principles below:

1) Archaeology is NOT Artifact Collecting. We’ve all stared in awe at a beautifully-crafted arrowhead or a glistening piece of antique glass, but at the end of the day it’s the context of an artifact that provides research potential. Without knowing how, where, and when that arrowhead came to its final resting place, we can’t understand the historical events and human behaviors that led up to it.

It might not be as exciting to study the soil around an arrowhead, or the small flecks of stone removed when sharpening it, but those things could tell us - for example - if the arrowhead was placed into a storage pit or accidentally lost at a campsite. When properly documented, a bottle dump can tell us when new products became available in a remote area or if a family’s socio-economic status changed over time.

To learn more about the importance of “context,” read the Arbuckle’s Fort Case Study below. This example, provided by Dr. W. Stephen McBride, and Dr. Kim A. McBride, shows the importance of precise information on the location of artifacts at a site; not just what site the artifacts are from, but where within the site, and especially where they are found in relation to each other and in relation to structural features.

2) Archaeology is a Non-Renewable Resource. In an ideal world, archaeological sites would never be disturbed or excavated... at least until better technology and techniques can keep us from losing information in the process. Archaeology is a destructive science, so once a site has been studied... it is gone forever.

As field methods improve, we become aware of the information tragically lost by previous excavations. Something that seems unimportant now - like grains of sediment or wear patterns - could be next year’s exciting new research topic.

Early archaeologists could never have conceptualized magnetometry and other remote sensing techniques that let us examine sites without any invasive digging. For another example, imagine if the mounds across West Virginia had been excavated after the digital camera was invented!

Ethical considerations are especially important when dealing with Native American burials or other sacred places, which should always trigger communication with descendant populations. Legal ownership or curiosity is not enough justification for disrespecting someone else’s history or beliefs. For example, prehistoric burials were disturbed in Logan County when amateur archaeologists dug too deep before a high school improvement project.

The same idea of “stewardship” applies when protecting an archaeological site on your property or dealing with a “legacy collection” handed down from an artifact-hunting relative. Even when an artifact’s context has been lost, you may be able to salvage some information by writing down what you know and getting in touch with a professional archaeologist or museum.

4) The Best Archaeology is By-the-Book. In order to protect cultural sites from looters, West Virginia requires archaeologists to apply for an excavation permit. There are strict guidelines for work and reports must be reviewed by the State Historic Preservation Office (SHPO). State Code §29-1-8 penalizes unauthorized disturbance to burials and archaeological sites.

It should be noted that this level of quality control means that professional archaeologists must have an advanced degree, formal training at a field school, and supervised experience. It can be a difficult career path and there are a limited number of archaeologists in the state who are professionally-qualified under federal guidelines. As a result, archaeologists rarely have the time or financial freedom to offer free work to the public.

5) Most Archaeology Happens BEFORE and AFTER the Dig. For every day spent in the field, an archaeologist might spend a week doing research, transcribing field notes, analyzing in the lab, and cataloging their finds for the permanent archaeological record. This documentation is what separates archaeological research from treasure-hunting.

Outside of commercial archaeology, excavations are designed to answer research questions. After a detailed review of past work, archaeologists look for specific areas where we don’t understand the past. Examples from West Virginia’s five-year plan include African-American sites and early industry. The research design guides the specific techniques used in excavation, as well as where to budget for specialists and how to take care of expected artifacts.

An even better scenario is completing all of this without removing artifacts. Similar to plants and rocks in a national park, take only notes and photos! Archaeologists often record counts, measurements, and weights of their finds before reburying them. This can sometimes be better for artifact preservation, as some materials degrade more quickly if their environment suddenly changes.

Arbuckle’s Fort, located a few miles north of Alderson, West Virginia is the most extensively excavated, and best understood, of any of the Greenbrier Valley frontier fort sites. Here archaeology has found and exposed the footprint of the primary bastioned fort stockade wall (110 x 110 ft or 33.5 x 33.5 m), two shorter stockade lines (one with a small bastion or redan), the stone foundation and chimney of a blockhouse, a blacksmithing area, four cellar pits, and a number of refuse pits and associated postmolds. One question posed by these excavations concerns the nature and function of the two shorter stockade lines; are they part of an earlier smaller fort, or could they be secondary lines of defense within the larger fort? The distribution of arms-related artifacts found in test units and by metal detecting helps answer this question and gives insights into documented attacks on the fort by “Indians” in July 1774 and September 1777.

The distribution of spent or fired round-ball ammunition found at Arbuckle’s Fort, interpreted as coming from Native American attackers, indicates firing on both the northwestern and northeastern main walls of the fort, but also firing on the two shorter stockade walls and the blockhouse. Though it is possible for the blockhouse to have been fired upon over the main stockade, it would have been nearly impossible to hit the short walls if the main stockade was present unless it had been breached. That seems very unlikely given the descriptions of this attack as unsuccessful. A better explanation for this pattern is that the short walls were part of an earlier fort and that these fired balls probably represent the 1774 attack which occurred from the southeast and northwest, whereas the balls at the outer stockade walls represent the 1777 attack which came mostly from the north, and came after the fort had been expanded from its 1774 footprint.

Further evidence for this conclusion is found in the placement of dropped, unfired, round balls, shot, and especially the gunflints that often serve to identify a firing line, or at least a location from which firing of a musket took place. In this instance, the dropped balls (.40-.50 in) and shot (.28-.32 in) suggest militia firing positions at the blockhouse, along the northwestern short stockade, and along the main northwestern and northeastern stockade walls. The lack of dropped balls in the two bastions is surprising, but may be explained by limited excavation in these areas.

Three types of gunflints have been recovered at Arbuckle’s Fort: honey colored French gunflints, medium gray European gunspalls, and gunspalls made of local, gray Hillsdale chert. The French flints and those of local chert are concentrated in both of the short stockades, the blockhouse, the northeastern structure (as defined by a cellar pit), and the northwestern main stockade. The European gray gunspalls, which were less available during the Revolutionary War, in contrast, are concentrated only along the southeastern short stockade, particularly in the redan (see map of flints). The presence of gunflints, particularly the European gray gunspalls, and dropped ammunition along the short stockade walls, suggest that they were heavily defended, making it unlikely that they were mere secondary lines of defense.

The distribution of fired and dropped ammunition and gunflints/gunspalls at Arbuckle’s Fort suggests that the 1774 Native American raiding party advanced up Muddy Creek, to the west, and Mill Creek, to the east/southeast in an effort to envelope the fort. They then fired on the fort’s northwestern and southeastern walls, and likely the blockhouse. The defending militiamen returned fire from the stockade walls and the blockhouse. With trained militiamen defending the fort, the Native Americans likely broke off the attack because victory seemed uncertain. 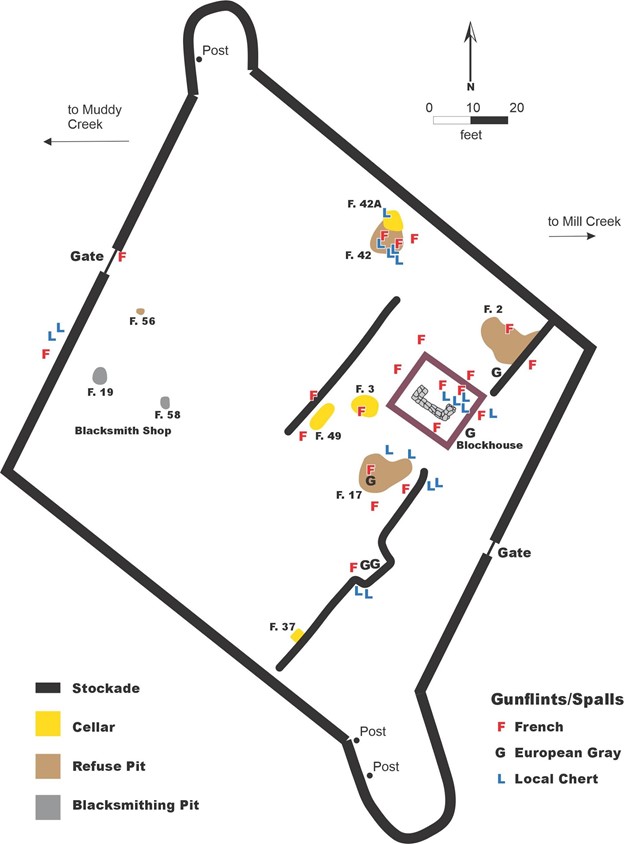 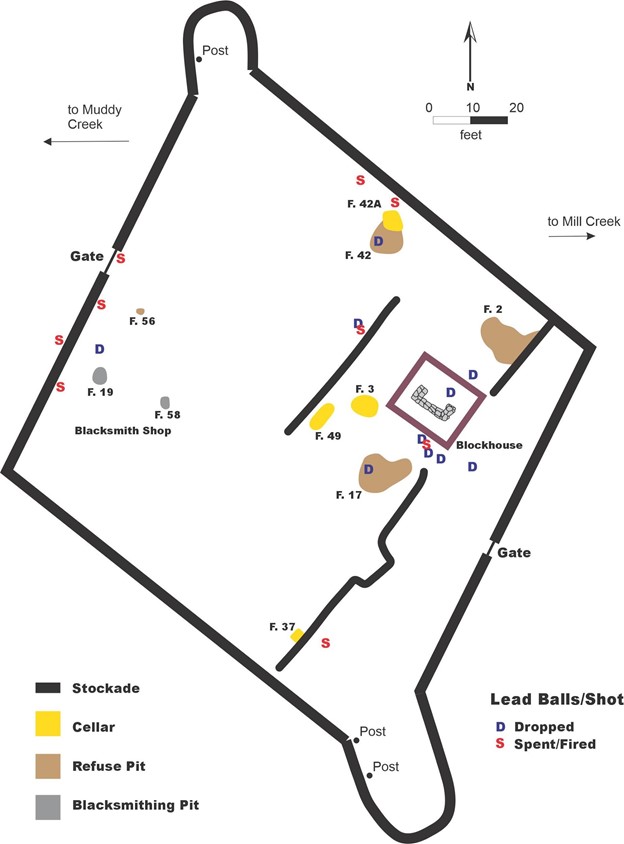